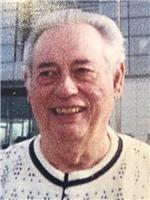 Truett Noris Thorn passed away Sat., Feb. 1st, 2020 at the age of 84 into the loving arms of Jesus. He was a veteran of The United States Air Force, a retired teacher and softball coach for West Monroe High School. He was proud of his softball girls. He was inducted in to LSCA Hall of Fame in 1992, was on the City Council in West Monroe, loved golf and dealing in antiques. After retiring he moved to Baton Rouge to work for The Housing Authority, there he met and married Brenda Dell Gremillion, his wife of 22 years and was a member of Hosanna First Assembly. Truett made many friends everywhere he went. He is preceded in death by his Mother, Olla Reid Thorn, Father, Rev. James Thorn, Brother, Jessie Dale Thorn, and 1st wife, Bennie Sue Thorn. Truett is survived by Step-sons Rodney Gremillion and wife Tammy of Denham Springs, Randall Gremillon and wife Beverly of Baton Rouge, Step- daughters Bonnie Drake and husband Lane of Walker, Darlene Guidry and husband Steven of Denham Springs, 13 Step-Grand children, and 10 Step- Great Grand children. Services to be held at Port Hudson National Cemetery, Zachary, La. on Friday, February 7, 2020 at 1 pm with Air Force military honors. In Lieu of flowers, donations can be made to Hosanna First Assembly, 8850 Goodwood Blvd., Baton Rouge, 70806.

What you can read next